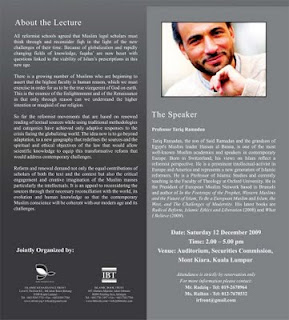 Posted by alitantawi at 8:02 PM No comments:

Allah Knows Best – The Value of Being Impartial


Allah Knows Best – The Value of Being Impartial

Impartiality is a value, and it is a noble one. It exists in a spirit of objectivity and a love of knowledge, which despises prejudice towards any position or party.

Our pious predecessors expressed their impartiality with the simple phrase: "I don't know." They used to say: "Half of knowledge is to recognize that you do not know something." They also said: "Whoever refuses to admit that he does not know, that person will soon be disgraced."

Another way of expressing one's neutrality and impartiality on an issue is to say: "Allah knows best." This is more eloquent, since it comes with the added meaning of affirming Allah's knowledge of all things.

Scholars of Islamic legal theory refer to this neutrality as suspension of judgment (tawaqquf). This is a specific scholarly position towards a matter of Islamic faith or Islamic Law, where the scholar determines the evidence to be equally weighted towards two variant rulings.

It is also an expression of extra caution in matters where a person fears speaking about a matter outside the scope of his or her knowledge. It is not a legal pronouncement, but rather a deferment of the matter to others. It is a sign of integrity and personal strength.

The Caliph `Umar b. al-Khattâb once, while delivering a sermon on the pulpit, read the verse 31 form Sûrah `Abasa: "And fruits and fodder."

The word translated here as "fodder" and also sometimes as "herbage" or "grasses" is the Arabic word abb. `Umar admitted on the pulpit that he did not know what this word means.

The very same admission has also been related from Abû Bakr.

We would be hard-pressed to find in our history any Islamic scholar who never admitted he did not know certain things or who never declined to answer certain questions that were asked of him.

The Prophet (peace be upon him) replied: "I do not know until I ask the angel Gabriel."

Thereafter, Gabriel informed him that the most beloved places are the mosques and the most disliked are the marketplaces. [Musnad Ahmad, Musnad Abî Ya`la, and Mustadrak al-Hâkim]

In stark contrast to the example of the Prophet (peace be upon him), the Companions, and the eminent Islamic scholars throughout the ages, we find many laymen who are quite willing to speak with authority on every matter, great and small, regardless of how well informed they are. Sometimes, they take sides just to dispute. So if one person says "true" the other says "false". If one says "lawful" the other says "forbidden". Many people speak hastily before giving the matter sufficient study. Had they only done their research, they would easily have seen how wrong they are. Alas, some people are just not prepared, mentally or emotionally, to deal with difficult issues and to research them with the required degree of thoroughness and rigor.

The media has emboldened the general public even further. Many people now regard it as a weakness when a scholar remains silent on an issue or admits he does not know the answer. They feel ashamed themselves not to have an opinion about everything, even if it is a singularly difficult question of Islamic Law or a tenet of religious belief. Every topic has become the same – politics, economics, ancient and modern history – and it makes no difference how much specialization is required to do justice to the matter.

What makes matters worse is when people become polarized about these opinions. They identify themselves and others on the basis of the views that they hold. Then they rally to defend their views using whatever means and resources are at their disposal, often belittling and berating their opponents in the process. It is sad how people invest so much energy into these conflicts, where none of the opposing parties has any real appreciation of the issues or the alternatives. So often, such people become fully distracted by these arguments from the essential truths of their faith and from the worship of their Lord. Instead, their hearts become full of resentment and rancor towards others.

This is why a scholar of jurisprudence once observed: “I find that the general public is more zealous about issues of Islamic Law than the scholars are.”

The reason for this is that a scholar who gives legal verdicts knows the issues and all the opinions and proofs that surround them. He knows the evidence for each opinion, and he knows who held it among the Companions, the Successors, and the leading jurists. On this basis, he gives preference to one opinion while being fully aware that other legitimate opinions exist that are also supported by evidence. Because of this, he does not state his opinion forcefully, nor does he become overzealous about it, nor does he overreact. On the other hand, we have a novice student or an average Muslim who receives this verdict from the scholar without having the proofs of the other opinions mentioned to him and without the issue being placed in a proper and objective framework. His heart becomes filled with the verdict and he sees it as if it is the religion itself. He becomes zealous about the legal opinion that he receives from the scholar and combative with anyone who disagrees with it, even if the one who disagrees with him is capable of juristic reasoning and might possibly be the one holding the correct opinion.

We need to get used to showing respect to ourselves and to others. We need to respect the very values that we believe in and not use them as a means to elevate our disagreements to the level of being some sort of conflict between truth and falsehood or between faith and unbelief.
Posted by alitantawi at 7:50 AM No comments: 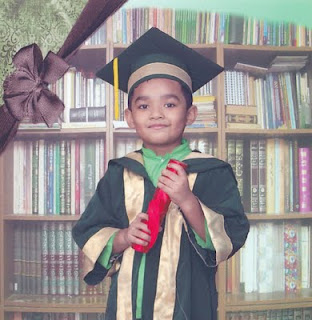 
'Speaking is an art, as is writing. The Prophet Muhammad (peace be upon him) has been described as possessing "eloquent conciseness" in speech. He would say a few words, but those words would carry an immense wealth of meaning.

His wife, `A'ishah, confirmed this. She said: "He did not have to speak at length like all of you do."

The more condensed an expression is, the more meaning each word must carry. A maxim, for example, is a wise statement with no superfluity, no unnecessary words.

The impetus for abridgement is often scarcity of time. The mind and tongue are compelled, to conserve time, to encapsulate the broadest concepts and most complex ideas in small, easily digestible packages.

It is also quite natural for people to tire from listening to someone droning on. Boredom sets in, and the audience starts looking at their watches, thinking that the speaker really does not have any idea of how to present his or her subject.

Alas, human nature compels us to be long-winded when we speak. At a conference, the very same person who was looking at his watch while the first speaker was presenting her lecture may not act any better when it is his turn behind the podium. He naturally sees what he has to say to be important. He feels others will be just as interested in it as he is. Moreover, he has something new to say, and everything he has to offer contributes something more to the topic than his fellow speakers have provided.

With this mindset, he drones on, until the session chair tells him his time is up. He is shocked and blinks his eyes. He feels there must be some mistake. He has not even gotten to the main point of his lecture…

This is due to ego, and ego knows no bounds. It is a virtue to be able to recognize the power of one's ego and how it influences one's thoughts, behavior, and speech. This recognition is what allows one expect from oneself the same that one expects from others. This is a quality rarely achieved except by those who are very God-conscious.

Most people live by a double standard: one for themselves and one for everybody else. The standard for the self is very indulgent and always ready with excuses. The standard for others is one that easily identifies faults and shortcomings. If the person with this double standard is somewhat fair, he or she will feel sorry about those shortcomings and try to look beyond them. Some people do not even possess this degree of fairness, and look down upon others with derision.

In this regard, Ibn Hibbân narrates the following saying: "One of you sees the sand in his brothers eyes, but fails to see the crud encrusting his own."

Though our egos are mountainous, our speech and actions only reveal their summits. The deep and massive roots of our egos are neither seen nor heard by people, but Allah knows the secrets of our hearts. He forgives us our weaknesses, and He helps us to surmount them. If we are left to the whims of our own egos, we will surely bring ourselves to ruin'.
Posted by alitantawi at 4:24 PM 7 comments: